Over my quarter of a century on this planet, I have learned that what you put in your mouth plays a huge part in how you feel. If you eat only junk, eventually you will feel like junk. If you eat well, you’ll be fitter, healthier and, I’d argue, much happier.

For the most part, I eat really well. I am a recent vegetarian (eight months and counting). Whenever possible, I try to read labels, buy organic, and support my local farmers. But I also go through periods of self-sabotage. Some days, when I’m feeling particularly in the pits (usually after a night of too much bubbly), my sole mission becomes to stuff my face with the worst possible junk. Chips, processed cheese, frappacinos and chocolate galore. I wouldn’t feel so guilty about it if my body didn’t play a cruel game of payback. Junk is almost immediately followed by headaches, indigestion, bad skin and remorse. Every. Single. Time.
Besides my back and forth with food, nutrition is also my passion. I am happiest when I am learning more about food and its magical healing powers, and when I can pass that knowledge on. So, it is only appropriate that I spend some time focusing on the junk I put in my truck as part of this happiness project.
For the month of August, I want to test out Brad Pilon’s theories in his book, Eat Stop Eat. My soon-to-be hubby went to university with Brad years ago, after which Brad went on to do several super smarty-pants degrees in science and nutrition. He then spent several years working in the sports supplement industry, and ultimately put all of that knowledge into Eat Stop Eat. His main argument: regular caloric restriction is the way to go. Brad argues that one 24-hour fasting period each and every week is the, “single and best way to eat and to live” not just for weight loss, but also for general health. He admits almost on the very first page that his theories do not fit into today’s popular nutritional rhetoric, but his research is impressive and his argument makes a lot of sense. Considering how messy the divide is between politics, industry and conventional nutritional “wisdom”, I’ll put my money on sound research any day.
Dan Buettner makes the same argument. In Blue Zones, which studies the world’s most condensed areas of centenarians to establish a de facto formula of longevity, Buettner reveals that one of the characteristics that is common to almost all centenarians is caloric restriction. Whether by choice, or due to economics, the finding is the same: less calories = less weight = healthier, longer lives.
The research is enough to convince me to give this eat, stop, eat program a try. I’m not looking to lose weight, just to be healthy and more conscious of what I’m eating, so I’m only going to fast once a week (Brad suggests two, non-consecutive periods weekly for those looking to lose weight). Every Tuesday from 2pm to Wednesday at 2pm, there will be no food for this here chickie. I get to drink, but only non-caloric beverages (water, herbal tea, black coffee, etc).
I’m not very pleasant when I’m hungry, so this so be interesting. 🙂
Thanks for stopping by!
mxo 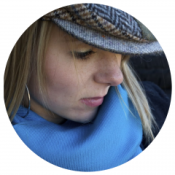